Cities call for collaboration with business on climate action

With support from Bloomberg Philanthropies, today CDP and AECOM launch our new report, It takes a city: The case for collaborative climate action. Read on to find out how cities are turning to business to address climate change.

The world’s cities account for approximately three-quarters of global greenhouse gas emissions. Their energy use, and the behaviour and habits of their citizens will dictate whether we are able to reduce emissions to the extent needed to avoid dangerous climate change as well as adapt to the impacts already being felt in cities.

Action by cities will be essential therefore to achieving the ambitious goals of the Paris Agreement – but encouragingly more than 7,000 cities have made commitments through the Global Covenant of Mayors for Climate & Energy. These cities have shown great ambition, but they will need to collaborate with a wide range of stakeholders if they are to meet their targets and substantially reduce emissions, adapt to the effects of climate change and benefit economically and socially from a low carbon economy.

Where business comes in

The investment needed in cities into low-carbon transport, energy, water, waste and telecommunications infrastructure is estimated at US$57 trillion between now and 2030.Investment of this magnitude can only be delivered through collaboration with businesses and investors.

Collaboration enhances a city government’s ability to account for its emissions and manage them. Despite the considerable power often in the hands of city authorities, the bulk of emissions in a city typically come from sources over which it exercises no direct control. Globally, cities’ municipal operations produce just 3% of total citywide emissions.The remainder comes from sources such as buildings and private transport where business, other levels of government, or citizens exercise direct control, but cities can still significantly influence.

This year, 533 cities from around the world disclosed climate change-related data through CDP’s cities program. Together with AECOM, we analyzed this data to examine where and how cities are collaborating on climate action with regional governments, businesses and investors, and to explore where the potential exists to deepen and broaden this collaboration.

The economic potential in partnering with business

The data shows that collaboration is happening, it is working and it has the potential to drive economic growth: 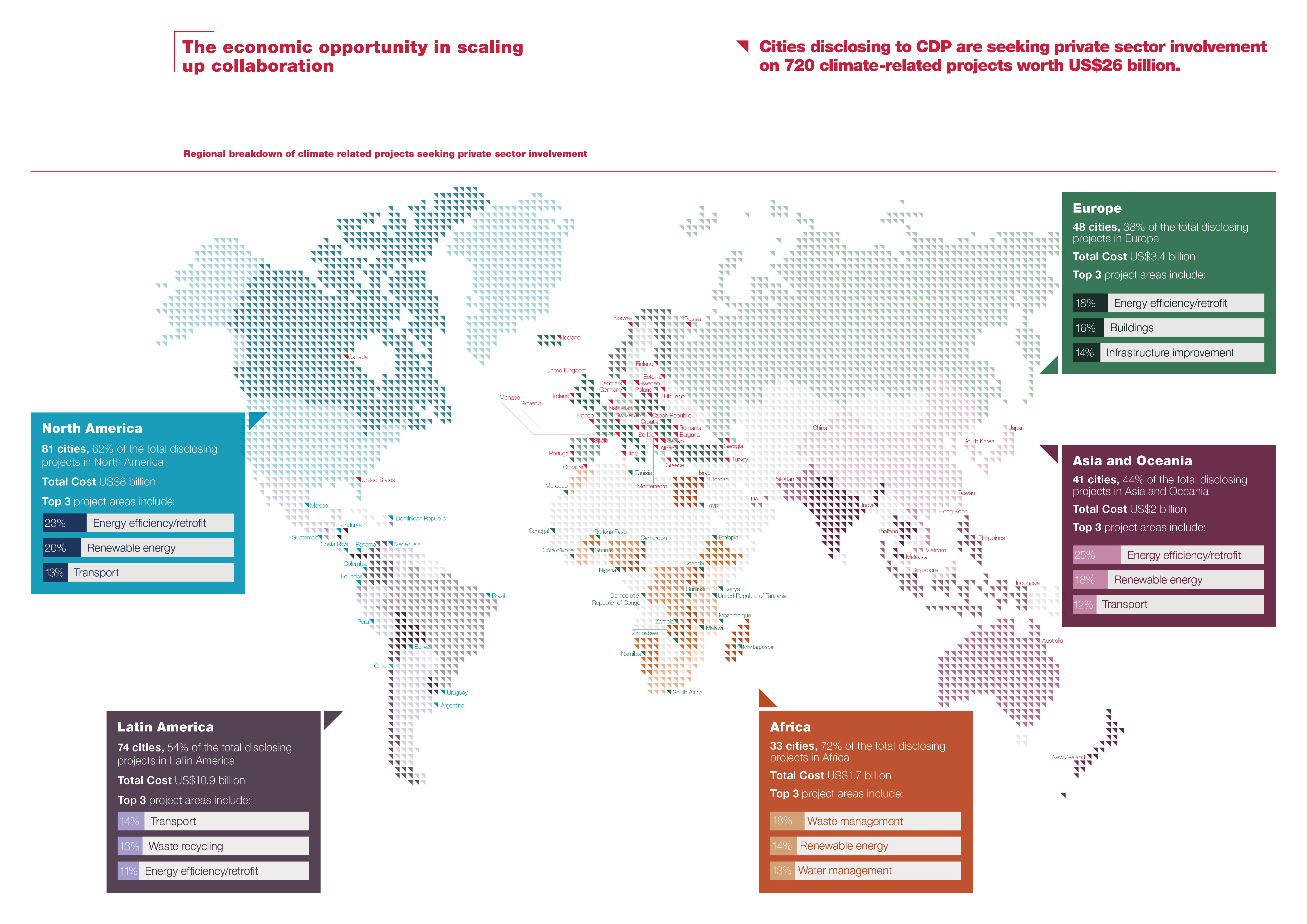 Ben Smith, director of sustainable development at AECOM, who partnered with us for the fifth year on our global cities report, says these findings confirm what they are seeing in their direct dealings with cities: “Cities the world over are identifying their priorities to reduce emissions, adapt to climate impacts and increase resilience, but more and more they are looking for partners to help them realise the solutions.”

While our findings show a strong appetite for collaboration with business, there are still numerous challenges facing cities in securing this partnership. Cities in Africa and Latin America for example, who demonstrated clear demand for private sector involvement on climate-related projects, were less likely than their global peers to have an emissions reduction target or indeed an emissions inventory. This places them at a potential disadvantage. And on the flipside, European cities were less likely to be seeking out private sector involvement, but have strong potential to do so – they are on average more likely to have a city-wide emissions reduction goal.

Seth Schultz, director of research, measurement and planning at C40 Cities Climate Leadership Group, says that the cities they work with have identified challenges working with the private sector to be among the toughest, and potentially most limiting, issues they face in their climate efforts. Schultz says “improving engagement between the private sector and city governments is a critical element” to overcoming such barriers going forward.

As the data from this year’s disclosures show, cities that collaborate are more ambitious, and stand to seize more economic opportunities and attract more investments than those who don’t. We at CDP look forward to collaborating more with our peers in the city and business space, including the Global Covenant of Mayors for Climate & Energy, Bloomberg Philanthropies, C40 Cities Climate Leadership Group, Climate KIC’s Low Carbon City Lab (LoCal), AECOM, ICLEI, We Mean Business, and all our other partners to help cities achieve their goals.