Home > Blog > Global cities are stepping up on climate action

Global cities are stepping up on climate action

Earlier this month, the world’s leading scientists – the Intergovernmental Panel on Climate Change – gave us the clearest warning to date on the devastating impacts heading our way if we do not tackle our carbon addiction.

In their special report on 1.5C the body warned that with even half a degree more warming would significantly worsen the risks of drought, flooding and extreme heat, leaving millions more people in poverty, and bringing huge impacts for our global economy.

With nearly 68% of the world’s population projected to live in cities by 2050, cities are going to be where the battle for climate change is lost or won.

Across the globe, cities are scaling up their collective efforts to tackle climate change.

This year, 90% more cities disclosed emissions reduction targets and twice as many cities said they have climate action plans in place, compared to prior to the Paris Agreement in 2015.

This is part of a global trend. City pioneers across the world are already demonstrating that the transition to a low-carbon future is possible.

At the Global Climate Action Summit, in September, 27 of the world’s largest cities, including Berlin, Sydney and New York, declared that they have already peaked their emissions, while CDP’s 2017 data showed that over 100 cities obtain the majority of their electricity from renewable sources. And 40 of these cities are already at 100% renewable energy including Burlington, Basel and Reykjavík.

Reaching these aims will take bold actions, and the 628 cities reporting to CDP this year are already taking vital steps to tackle climate change, while at the same time creating jobs, securing healthy environments for their citizens and building better places to live and work.

The right type of climate actions?

In our new infographic we show that cities are stepping up on all four of these areas, as well as across a wealth of other areas, including city-wide, outdoor lighting, urban agriculture, finance and economic development, and water management.

We’ve found that cities are taking the most action to reduce emissions from buildings, with focus on energy efficiency and retrofit measures. With the potential to provide the greatest emissions reductions, low carbon energy supply and the decarbonization of the electricity grid represents the biggest untapped opportunity for cities. 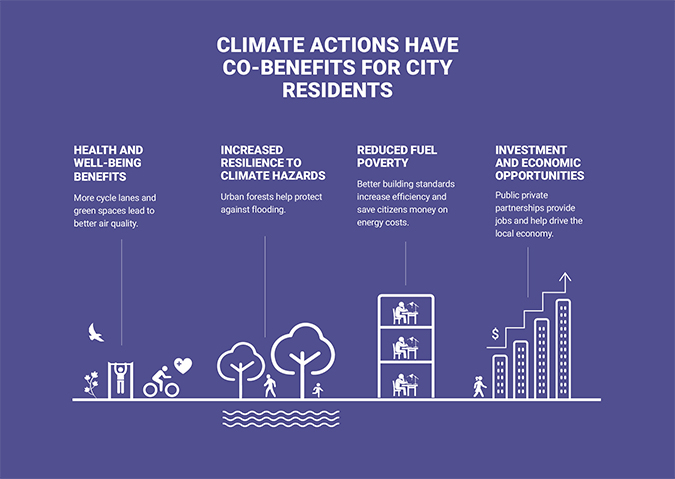 City action around the world

For cities in Africa, Asia, Latin America and North America reducing the emissions in their buildings is a top priority. However, for cities in Southeast Asia and Oceania, mobility is top of their agenda.

Encouraging non-motorized transport is particularly popular with cities all over the world. 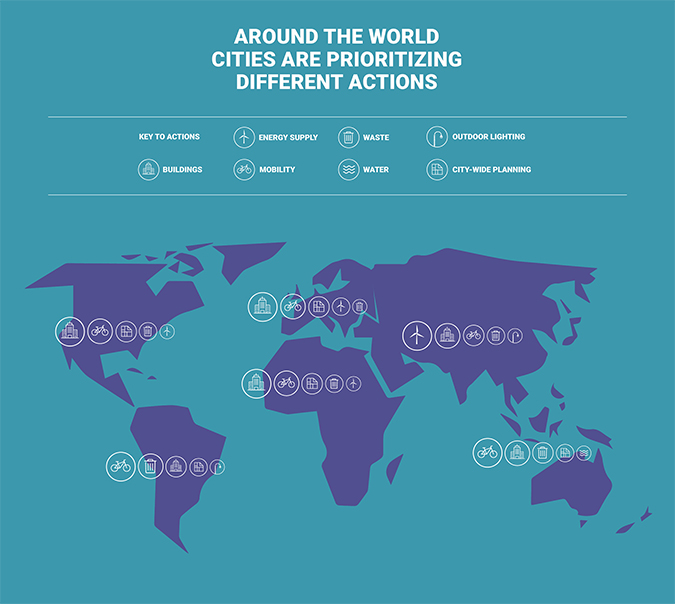 One city that is making in-roads is Louisville, Kentucky in the United States.

Situated on the Ohio river and built on floodplain land, Louisville’s low-lying location makes it highly suitable for cycling. Since 2013, the city has added over 200 miles of bicycle facilities, developed a bike education program for children and adults and launched a bike share program for residents.

An upshift in global cycling use – from a current 6% or so of all urban passenger miles to 11% in 2030 – would cut overall urban transport emissions by 7% (in 2030). Louisville understands this and recognizes the public health benefits that come from encouraging cycling in the city.

Waste to energy in Hobart

Hobart, Tazmania’s most populous city has wasted no time in taking advantage of the landfill gas captured at McRobies Gully landfill.

In 2017-18 the landfill gas captured at this plant was used to produce 6,067 MWh of electricity, enough to power around 1,064 Tasmanian homes. Using the gas in this way has avoided the equivalent of 35,347 tonnes of CO2 being released into our atmosphere.

Cities of the future

Cities all over the world are stepping up on climate action.

By reducing emissions locally, cities have a critical role to play in limiting warming to 1.5C while at the same time building resilience, strengthening their communities and their economies.

But with global greenhouse gas emissions needing to peak by 2020, and rapidly reduce in the years that follow, we need cities to continue to step up their action, and work with other actors to continue to drive change at the pace and scale required.

Together we can build the cities of the future.