Cities at risk: dealing with the pressures of climate change

We live in a rapidly urbanizing world. In the next 30 years, some 70 million people will move to urban areas every single year. By 2050, two-thirds of the global population will live in cities.

We are already seeing the impacts of climate change which, unchecked, will subject populations to untold risk and suffering, push already struggling services to the brink and undermine city government's efforts to protect their citizens.

The first step to managing risk, is to measure it. In 2018, over 620 cities disclosed climate and environmental data to CDP. 530 of these cities - representing a combined population of 517 million - reported on climate hazards.

Meanwhile long-term hazards are being notably less reported (11%). With 77% of long-term hazards being reported as posing a serious or extremely serious threat, cities must brace for these substantial, far-reaching climate impacts, and must begin taking their medium and long-term risks into further consideration.

Concerningly, while we are seeing significant short-term hazards being reported, the medium and long-term hazards of climate change are currently being under-reported by cities. With the science showing that by 2050, eight times as many city dwellers will be exposed to high temperatures and 800 million more people could be at risk from the impacts of rising seas and storm surges, cities cannot afford to underestimate medium and longer-term hazards.

As the recent Summary for Urban Policymakers on the IPCC's 1.5°C report states, warming greater than 1.5°C will bring risks such as "exacerbated urban heat islands, amplification of heat waves, extreme weather volatility, floods, droughts, coastal inundation, and an increase in vector-borne diseases like malaria and dengue fever". Yet, only 11% of risks are reported as long-term.

Cities at risk: What this means for citizens

With rapid, unprecedented urban growth expected to continue in the coming decades, cities' vital infrastructure and social care services are already under pressure. Climate change is only set to exacerbate these existing social and economic challenges, as its physical impacts are set to bring major disruption to government and business operations.

Cities are also reporting a high number of social risks in the current and short-term, while the longer term risks are less reported across all regions globally. While we would expect social risks to continue to increase in coming decades, cities are only reporting 'population displacement' as a growing risk. Only with clear knowledge of long-term risks can cities plan infrastructure and services adequately.

We know that the impacts of climate change will not be evenly balanced, the poorest of society will be hit hardest, therefore it is unsurprising that almost a fifth (19%) of cities are reporting 'increased risk to already vulnerable populations' as one of their top social risks associated with our changing climate.


On top of this, every half a degree more warming will result in a deterioration of public health, with findings from the IPCC showing that a temperature rise of 2°C will result in a vast increase in extreme heat, drought, and vector-borne diseases compared to a 1.5°C temperature rise. Some cities are demonstrating an awareness of this, with 17% of cities reporting the risk of 'increased demand for public services' and 16% reporting an 'increased incidence and prevalence of disease'.

When asked about the public services facing the biggest climate risks, cities reported their public health services as most under threat.

Yet public health services are not the only vital service reported to be under-threat from our changing climate. From energy, to water supplies, cities are expecting to see many of their most fundamental pillars come under threat in the coming years.

What actions are cities taking?

Building resilience will be key for urban policymakers, and will provide many co-benefits, making cities wealthier and healthier places to live and work. Our data shows that cities are already enacting policies to build resilience with flood mapping (167 cities), crisis management (126 cities), community engagement (106 cities), tree planting (99 cities) and long-term planning (88 cities) being the most reported actions.

While cities are implementing a mix of policy and planning projects and infrastructure based projects, cities are reporting more policy based solutions, with fewer investing in big infrastructure projects. However, with the physical risks of climate change looming, policy alone will not be enough to tackle the impending climate crisis - cities must take steps to ensure their infrastructure is prepped for upcoming hazards.

Cities are reporting 'long-term planning' as one of the most impactful ways to build resilience, meaning high-impact, long-term projects, including investment in climate resilient infrastructure and nature based solutions, are desperately needed. By holding off on putting these projects into action, cities are failing to fully plan for the future.

You can't manage what you don't measure

The first step for cities is to conduct a thorough vulnerability assessment to understand their climate risks, both currently and in the long-term.

Only 46% of cities have completed vulnerability assessments. 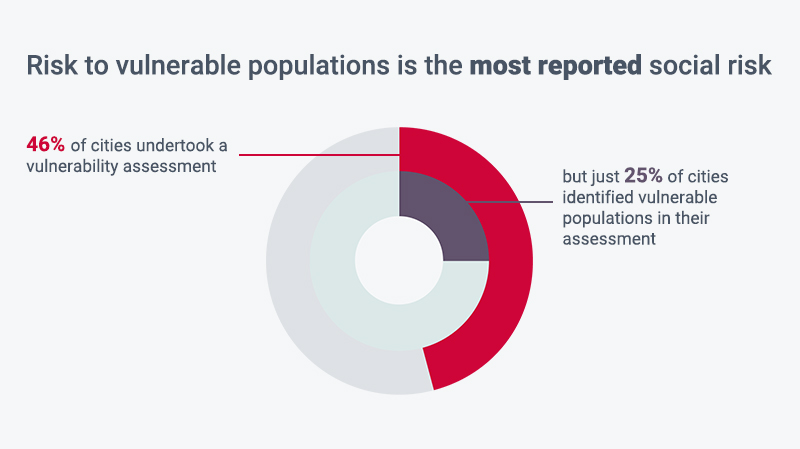 A high-quality vulnerability assessment involves engagement with a broad range of stakeholders, in order to identify any previously overlooked areas of vulnerability, offer a more nuanced understanding of the root cause of vulnerabilities and hence offer better-targeted adaptation responses.

How to boost action in the future

With the anticipated growth in urban populations, cities will continue to face a myriad of challenges in the coming decades, some of which will undermine their ability to address the impacts they face. But by investing in the right infrastructure and services, cities can take actions which will improve the lives of their citizens and build resilience against climate change.

In 2018, cities reporting through CDP identified wide ranging factors that could assist or hinder them in their transition to a climate resilient future. With 863 barriers to action compared with 456 enablers reported, cities appear more adept at identifying challenges than facilitators.

Meanwhile, engaging with communities was considered the best route to resilience (56 cities), followed by land use planning (44), access to education (35), access to basic services (33), government capacity (30).

Cities are facing a wide range of barriers to action, which vary widely across regions, showing that there are no ‘one size fits all’ solutions when it comes to building city resilience.

A similar level of diversity is seen when it comes to factors which could enable cities to take action, with a huge difference witnessed across regions.

However, in four of the six regions - North America, Europe, Oceania and Africa - cities cite access to quality information to be a key enabler action, again showing the vital importance for cities to measure and understand their risks and opportunities

The first step to action

Climate change represents a grave threat to cities across the planet. The world has already warmed 1 degree Celsius above pre-industrial levels, even with drastic action to limit further warming, risks are set to continue to manifest for decades to come.


It is vital that cities act to build resilience, and protect their citizens from the impacts of climate change. The first step is for cities to understand their vulnerabilities. All cities should undertake full vulnerability assessments that do not just assess current risks, but those expected to hit in the coming years and decades.

Only then will cities be able to plan in the right actions, and ensure that they are investing in the infrastructure of the future, that will not compound the climate crisis, and that can stand the test of time in the new normal brought about by dangerous climate change.

The full data-set used to create this report can be found on our Open Data Portal.

Take the first step towards action