Florida’s West Palm Beach has long demonstrated climate ambition, surpassing targets years ahead of a deadline it set as part of the DOE Better Buildings Challenge in 2015 and continuing to ramp up efforts in the face of national fallback. The entire southern Florida region is vulnerable to hurricanes, extreme heat, and rising sea levels among other climate hazards. West Palm Beach — home to 108,000 people — is fast ramping up initiatives to lighten its environmental footprint by setting an ambitious target of meeting net zero emissions by 2050. West Palm Beach, a Four-STAR Community and Silver LEED for Cities and Communities partner, is updating their Sustainability Action Plan and has recently completed a Climate Resilience/Vulnerability Assessment, both of which will be essential in planning for climate issues now and in the future.

To help get to net zero, West Palm Beach aims to run entirely on renewable energy. As a growing metropolis in the “Sunshine State,” West Palm Beach has been exploring ways to harness solar energy since it joined a coalition of 250 cities at the 2017 U.S. Conference of Mayors that pledged to 100% renewable energy use. West Palm Beach is eager to lead by example, enabling citizens to access solar power for their homes by offering financing options — Property Assessed Clean Energy (PACE) that allows solar installations and energy efficiency improvements and the Neighborhood Solar Co-Op Program — that utilize bulk purchasing power to reduce solar costs. The city is also in support of a shared solar program being considered by the Florida Public Service Commission. West Palm Beach has streamlined its solar permitting process to allow for same day approval for 10KW or less solar systems— the first in the state of Florida to do so.

“West Palm Beach has been focused on climate action for more than a decade and it continues as a top priority, from streetlight retrofitting to provision of solar energy,” said Mayor Keith James. “Planning for resilience to address issues such as sea level rise and rain-induced flooding will enhance the city’s viability now and in the future.” 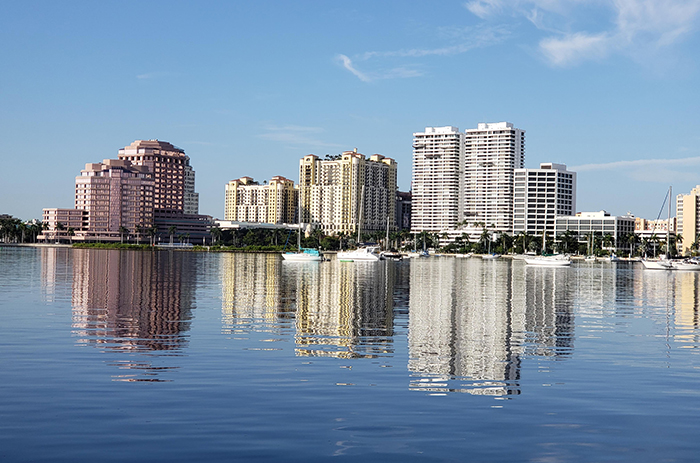 Alongside its progress toward being powered by 100% renewable energy, the city is adapting to and preparing for climate-related risks. West Palm Beach is separated from the Atlantic Ocean by the Intracoastal Waterway and is situated on the Atlantic Coastal Ridge, giving it a higher topography so flooding due to sea level rise is not as immediate a threat as it is for some sister cities to the south.

Still, coastline protection is key for the waterfront town, whose local economy is fueled by sun-seeking seasonal visitors and year-round residents that make up this diverse locale. The city has approximately 7 miles of aging sea walls along the Intracoastal that are undergoing inventory and assessment, along with stormwater outfalls, to better understand areas of vulnerability. Additionally, the city is identifying areas that could be used for "living shoreline" or natural coastal environments that could serve as a storm surge buffer and habitat for native plant and animal species.

West Palm Beach is simultaneously tackling the dual challenges of heavy rainfall and drought and has also been steadfast in safeguarding water reserves. The city is home to Grassy Waters Preserve, a remnant of the Everglades wetland ecosystem, and the reservoirs of Clear Lake and Lake Mangonia that provide the bulk of the city's drinking water supply. To prepare for drought, the city has developed a Drought Master Plan that will account for future population growth and increased periods of drought to simulate future weather events. West Palm Beach’s Innovative Stormwater Master Plan, first implemented in 2016, has led to improvements to the city’s stormwater system to better handle flooding from heavy rainfall through more robust storm drains and tidal valves that tackle rising sea levels, storm surges and tidal flooding events from the Intracoastal.

West Palm Beach has proven it can cut its carbon footprint while preparing for the worst effects of climate change. In doing so, it provides an example of how cities can not only prepare for the new normal that climate change presents but also work to build the climate-safe future we need to thrive by rapidly reducing carbon emissions.

Fayetteville
Cutting emissions for citizens and the Paris Agreement
Greater Manchester
How the UK’s “City-Region of Change” is setting the bar for climate action​​
Windsor
Tackling the urban heat island effect from the ground up
We use cookies to improve your experience on our site. By continuing to use our site you accept our use of cookies. Please see our Cookie Policy and Privacy Policy for details.